Beyond the Entrepreneur: Mark Fletcher 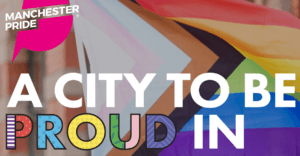 How did he do it? Mark was a freelance sponsorship manager working for the Manchester Pride team in 2004 to help them with increasing sponsorship for the annual event. In late 2013 the previous director stepped down and Mark thought he could make a greater difference as CEO, so put his name on the ballot. Since his appointment in early 2014, Mark has been running and expanding the event to something so awesome it’s now a full Bank Holiday Weekend extravaganza, with its parade and live concerts.

The numbers: in the time that Mark has been CEO, the turnover of the charity has more than doubled and he has tripled the amount the organisation raises for charitable causes. With this increase the charity has been able to extend its reach and impact even more people in the community.

Proudest achievement: The man himself says: “Re-engaging the many LGBTQ+ people, organisations and allies who had previously felt disconnected to the charity. This has enabled me to deliver a strategy that has turned around the charity’s fundraising efforts, and placed us firmly on track to continue on our path to fight for the advancement of LGBTQ+ equality.”

What’s next for Manchester Pride: the 2021 festival, which starts on Friday 27 August and ends on Monday 30 August, is expected to be the biggest yet with tickets selling out in minutes, and announcements being made all the time, with headliners signed up so far for MCR Pride Live (which takes place 28th – 29th August 2021) including Jodie Harsh, Sophie Ellis-Bextor, Ella Henderson, Sigala and Zara Larsson.

If you’d like to be part of the 2021 Manchester Pride event or just want to know a little more about what takes place, click on this link. The charity welcomes any donation, no matter how small, towards the Manchester Pride Fund, and every penny donated goes directly to supporting LGBT+ causes and projects in Greater Manchester. You can donate here.

What’s in store for the Cheshire property market – and when is the best time to buy?

Triumph for Beyond Law Group at the Manchester Legal Awards

Surveys: what are they and why does my property need one?

Service Charges: What do they cover and what should you expect?

When is the best time to sell your house?

Why do Conveyancers need to know where my money has come from?

Why do conveyancers need my ID and proof of address?

Rentcharges: What are they and what does their future look like?

Why does buying and selling houses take so long?

How to protect yourself and others when purchasing a property with someone.

House Raffles: How do they work and what happens if you win?